For my daughter's 3rd birthday I made her a bunch of different things to create a "Dress Up" present. One of the things I thought was important to include was Play Silks. Basically all it is, is a square of fabric with finished edges. They are so great for imaginary play because they can be used as scarves, shawls, handkerchiefs, baby doll blankets, wrapping paper, aprons....or the little miss can simply twirl around with it and watch it fly through the air. This is really very simple to do as long as you have basic sewing skills. Don't be discouraged if you don't have a sewing machine either! It may take some time to do these by hand, but it would be good practice! And seriously, if I can do it, anyone can. The hardest part is pinning. Anyway, here is how to make them.

You will need:
Approx. 31X19.5 inches of fabric for 1 play silk. Or more if you want a few different colors. But you can customize and make them whatever size you feel is right. I thought making mine rectangular would make them the most versatile.
Thread
Scissors
Sewing machine
Pins


1. Start by pinning the edges all the way around the 31X19.5 piece of fabric. For the white lacey fabric (it was actually sturdier than most laces) I just folded the edge over once about 1/4 inch. But for the purple and pink satiny fabrics I folded them over twice, since they unravel very easily. 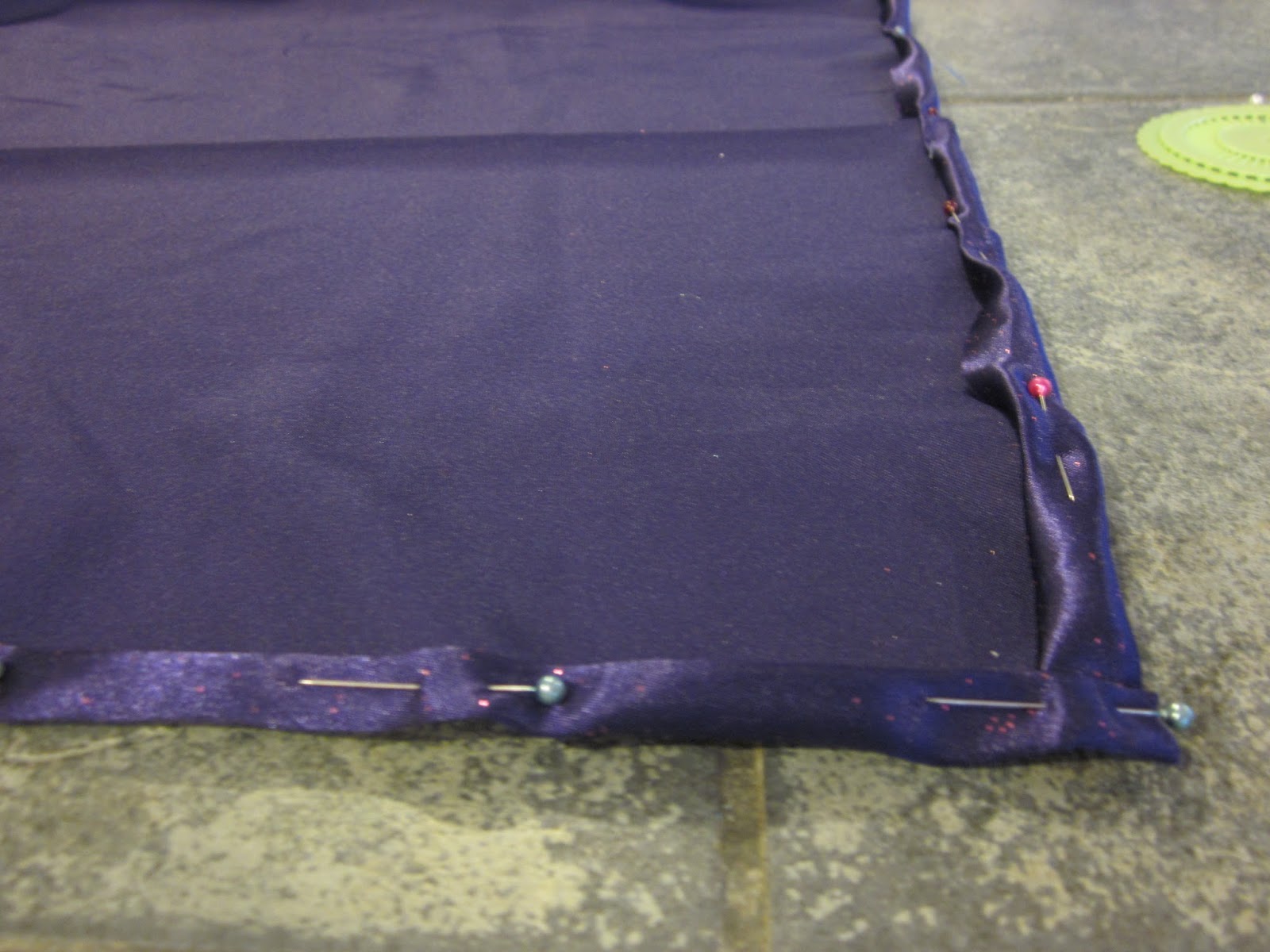 2. Using the larger zig zag setting on your machine, sew all the way around the edges, right on the fold. I was super excited because it was my first time using the zig zag setting, and it worked! I didn't screw it up! Phew! You can just sew a straight line, but the zig zag ensures that it doesn't unravel so easily. Since I expect these things to be played with for years to come, I wanted them to be ready for the job. 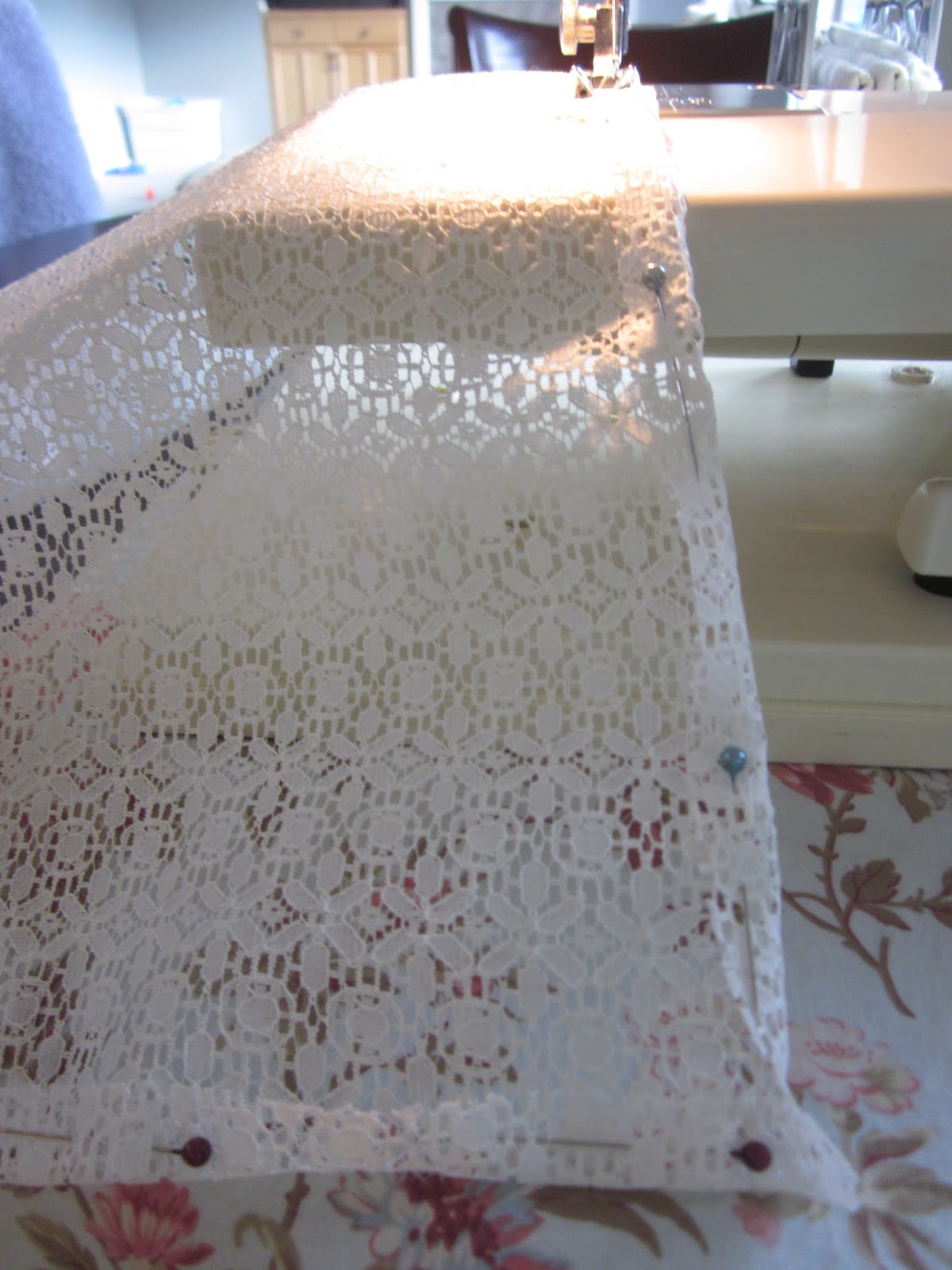 3. All finished and ready for play time! 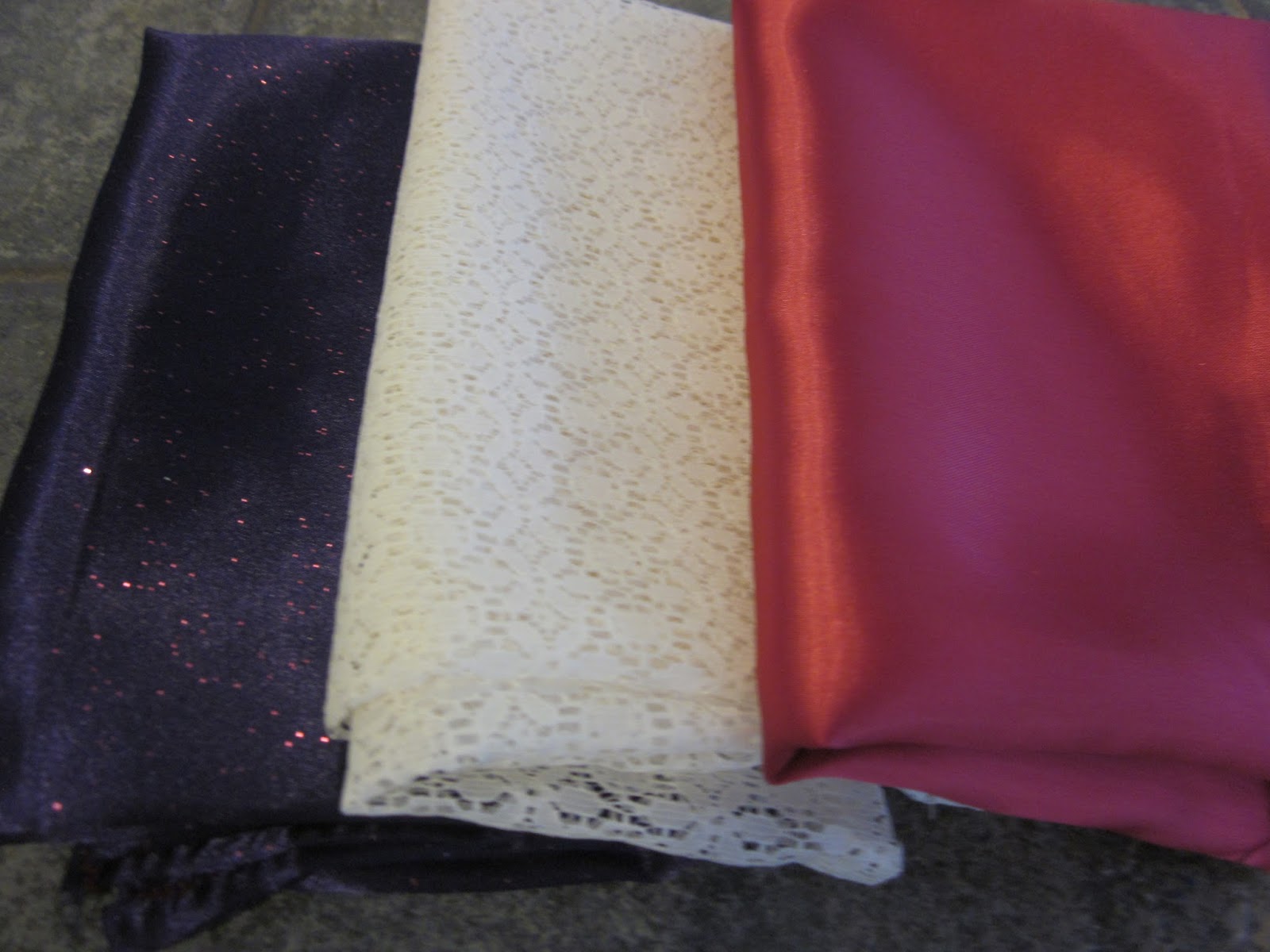 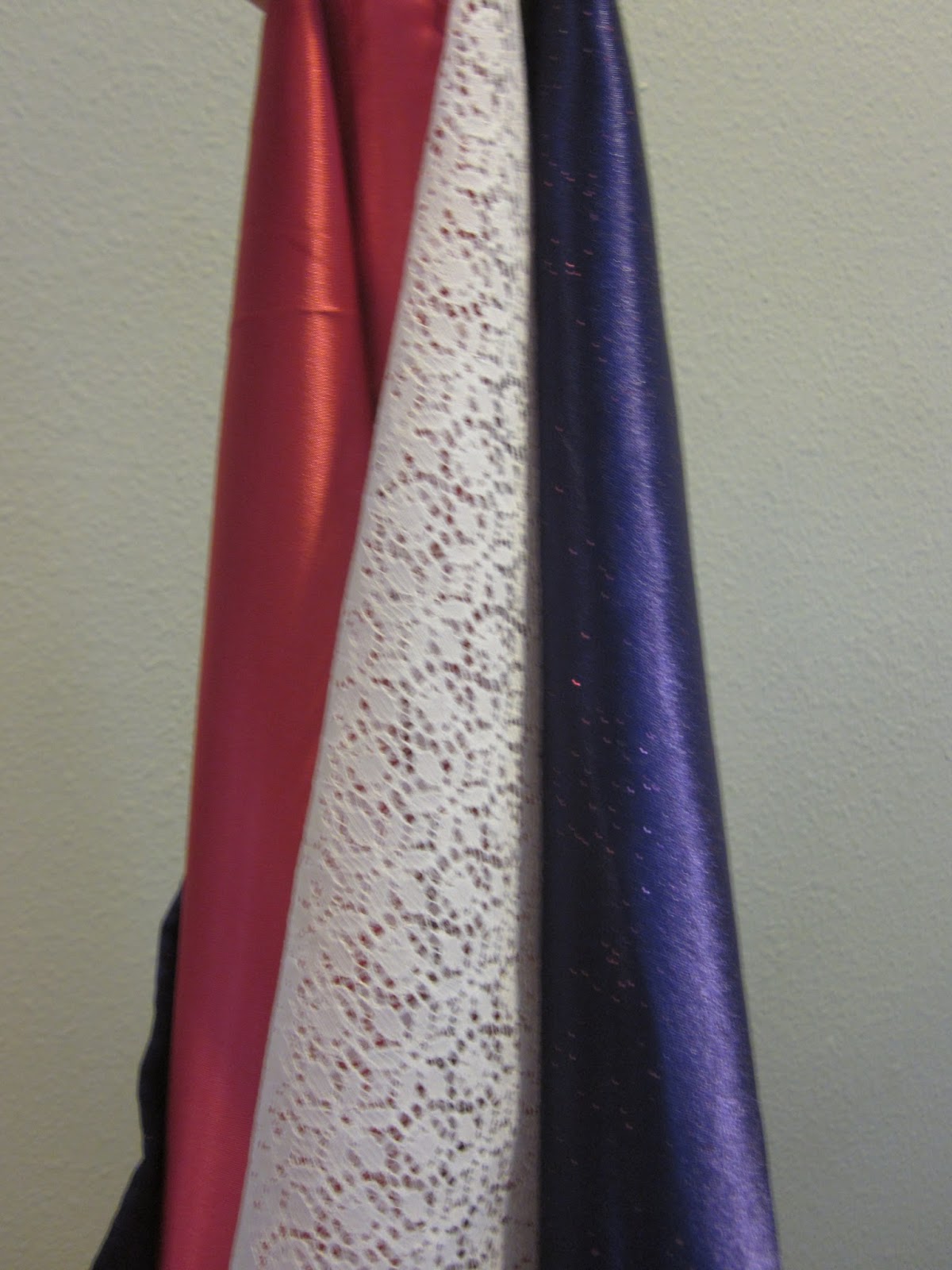 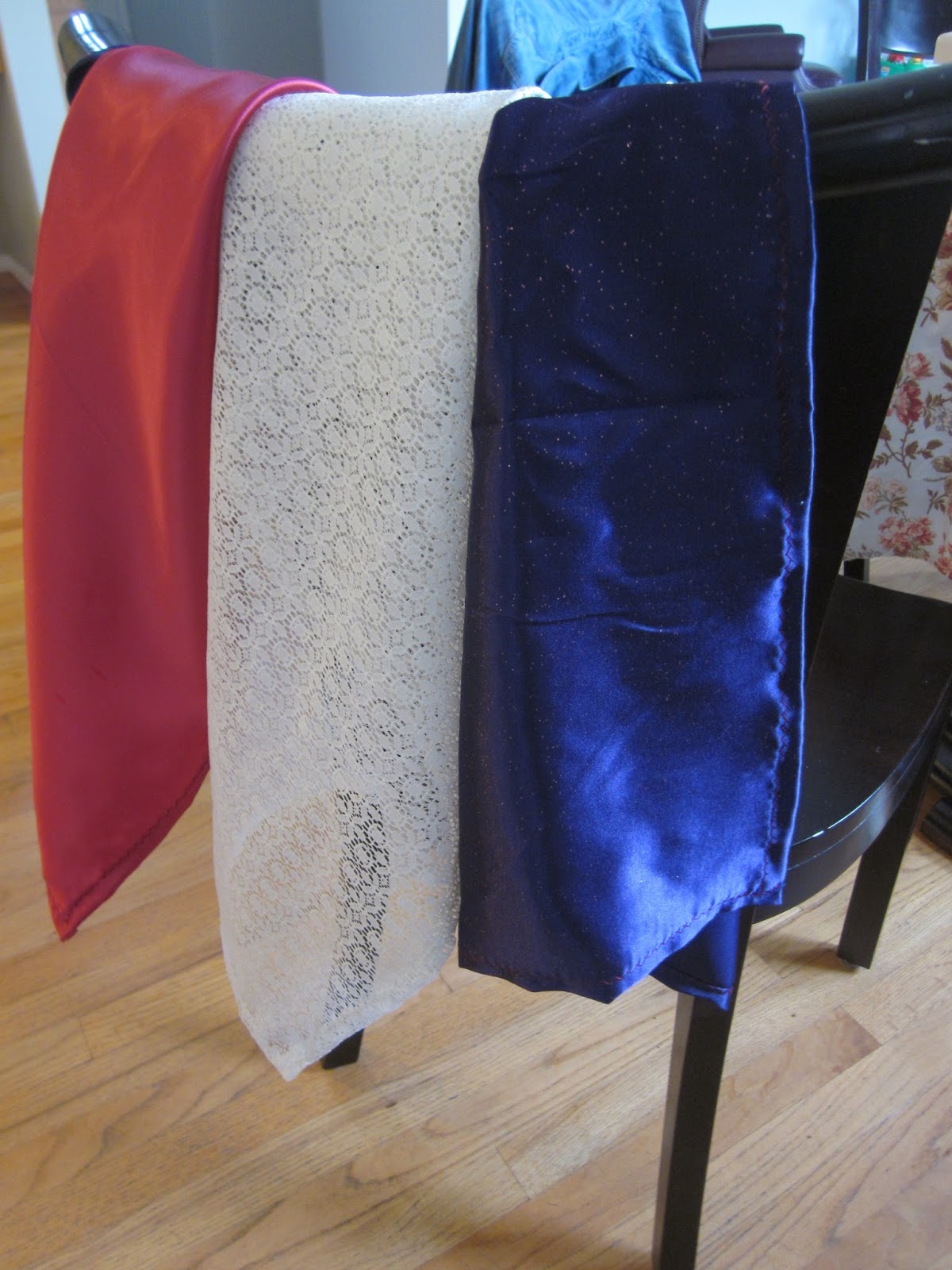 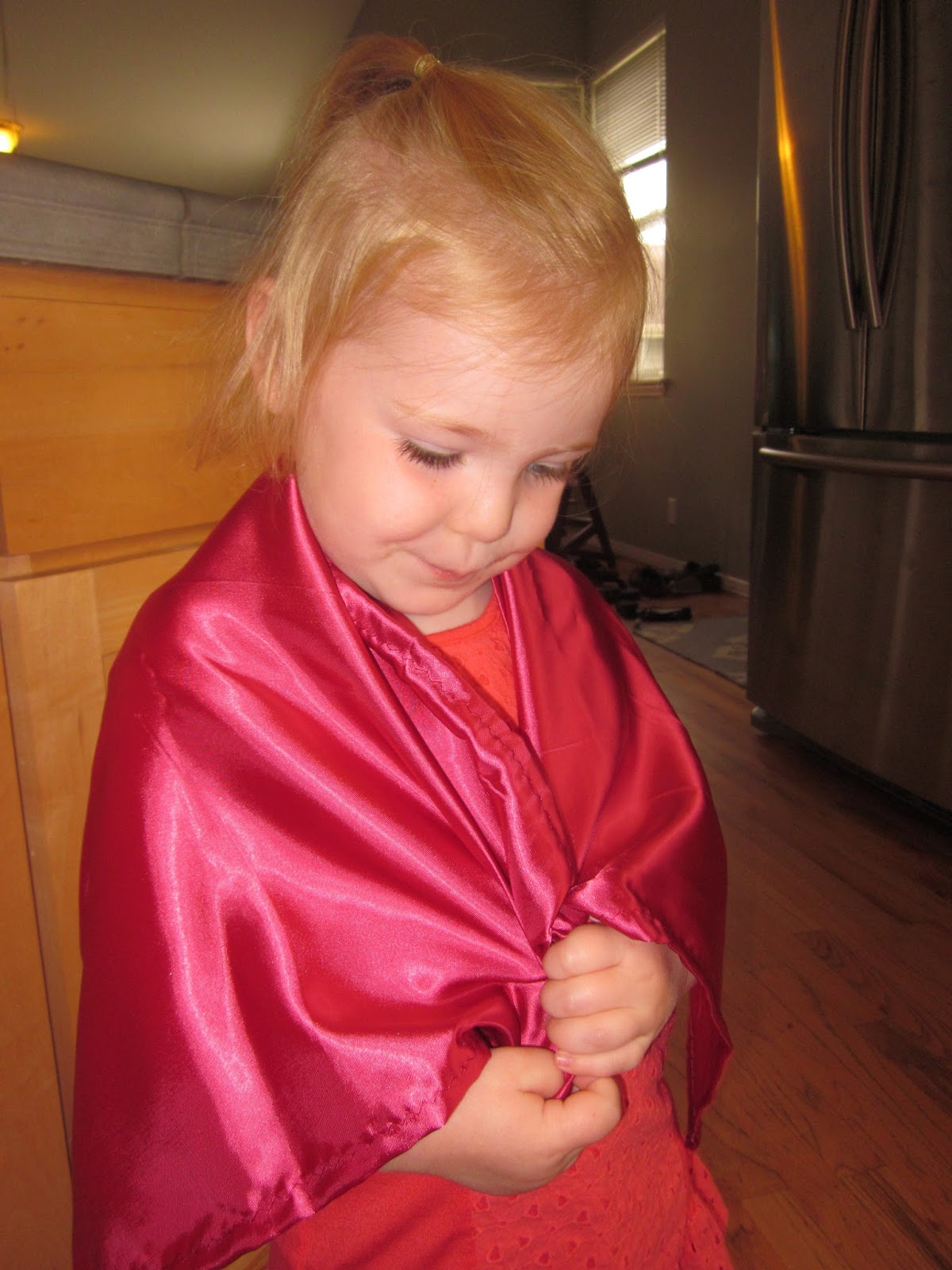 Have fun dreaming up new ways for your little one to use their play silks. They can even be used for boy's imaginary play. Hello, a parachute for the army guys?
Happy crafting everyone!
Posted by Brooke at 7:30 AM No comments:

Ever want to add something special to your paper party napkins? I've got a simple, fast craft for today that will help you add a special touch the next time you are throwing a party. Personalized Paper Napkins. These would be great for birthday partys, Summer bbqs, holidays... You could even just do a monogram (your initials) and have the napkins on hand for any occasion.

Plain paper napkins (or any light color. I got mine from the local party store)
Rubber stamp (depending on what type of party you are having, there are tons of stamp options)
Stamp pad (non- toxic. If you are using white napkins like me, you can use any color of ink, but use a darker color of ink if you are doing a light color of napkin other than white to be sure it shows up) 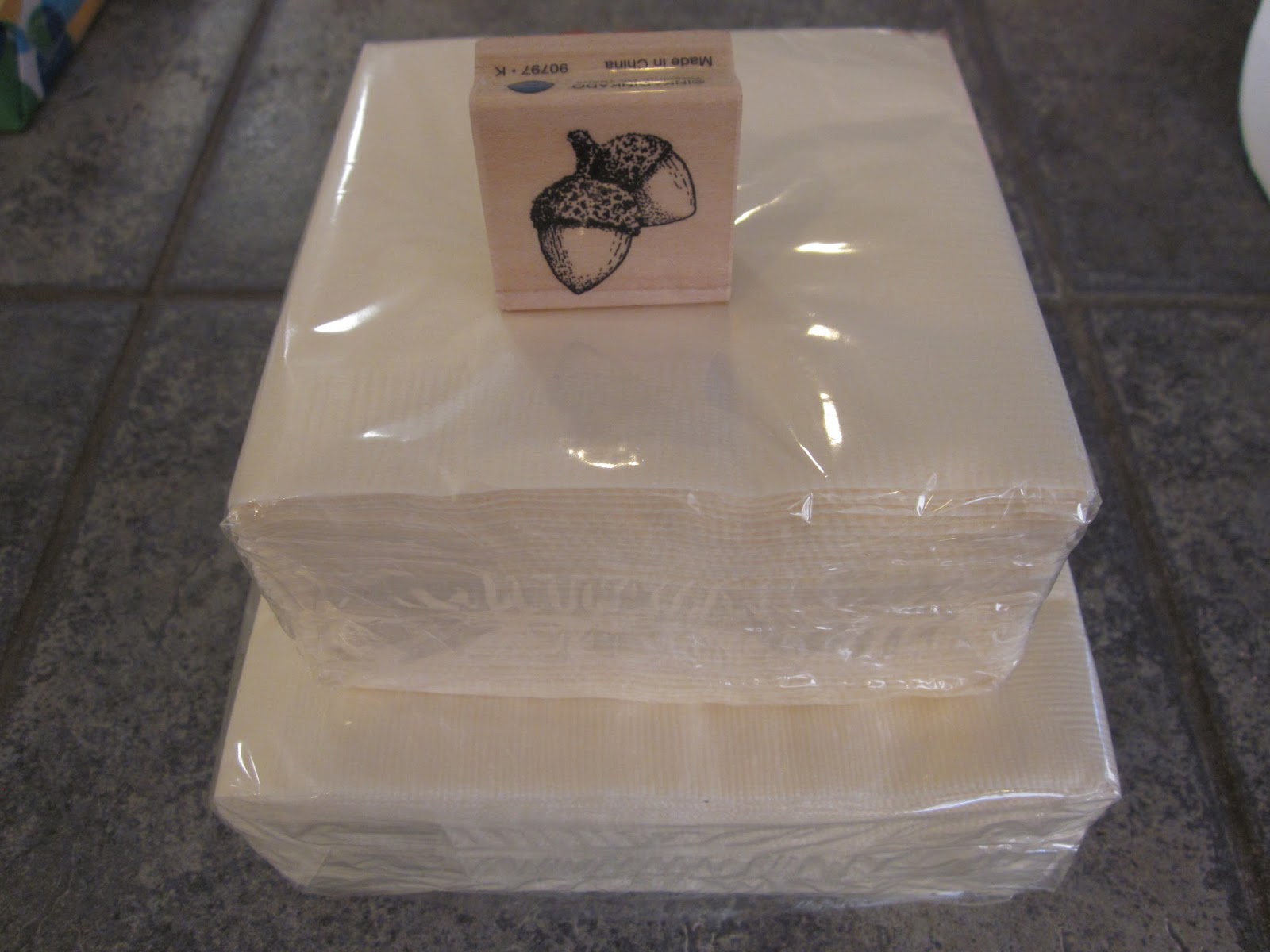 All you do is stamp the rubber stamp into the ink and then stamp it on the napkins where you want the picture or letter to go. 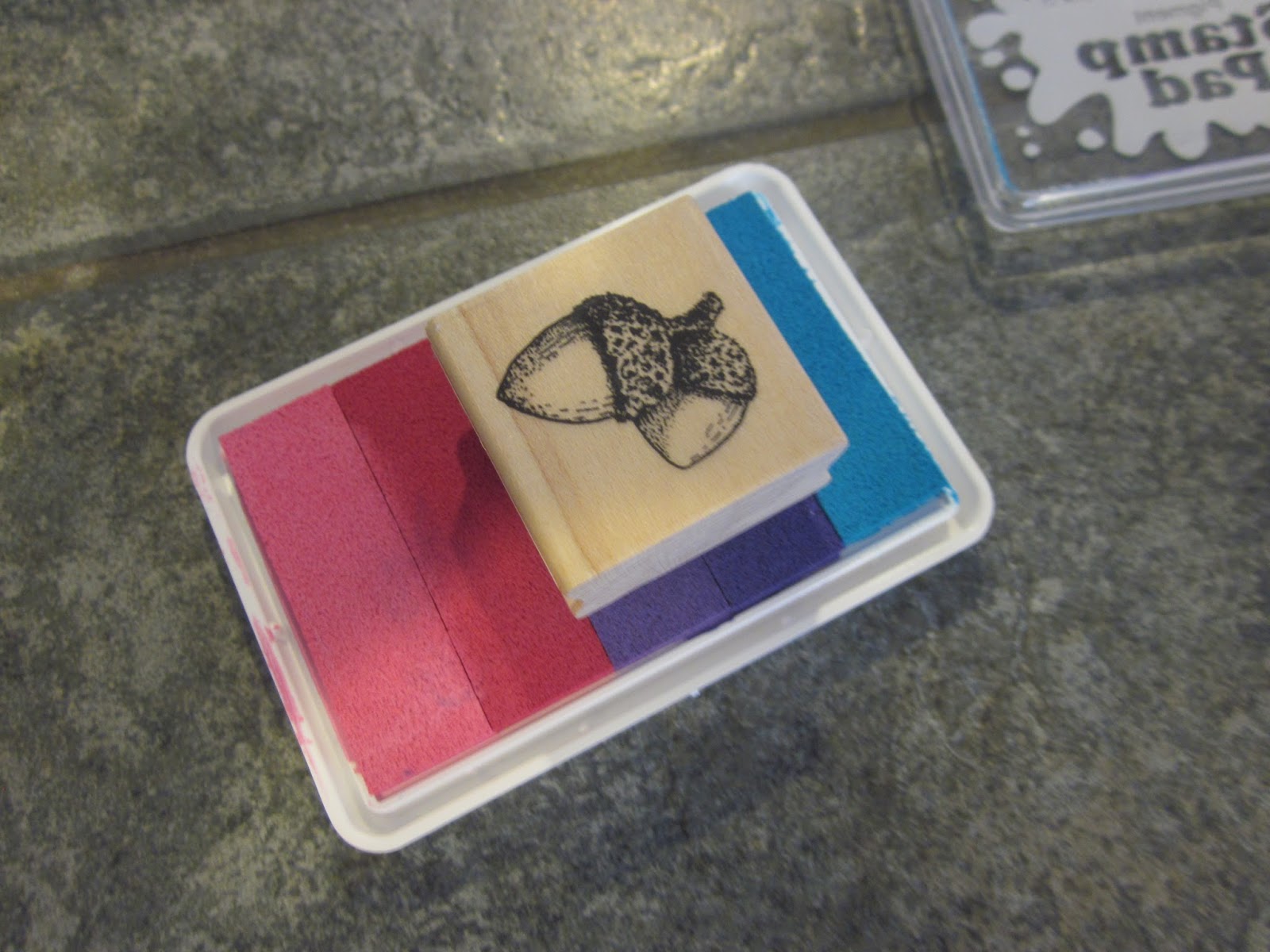 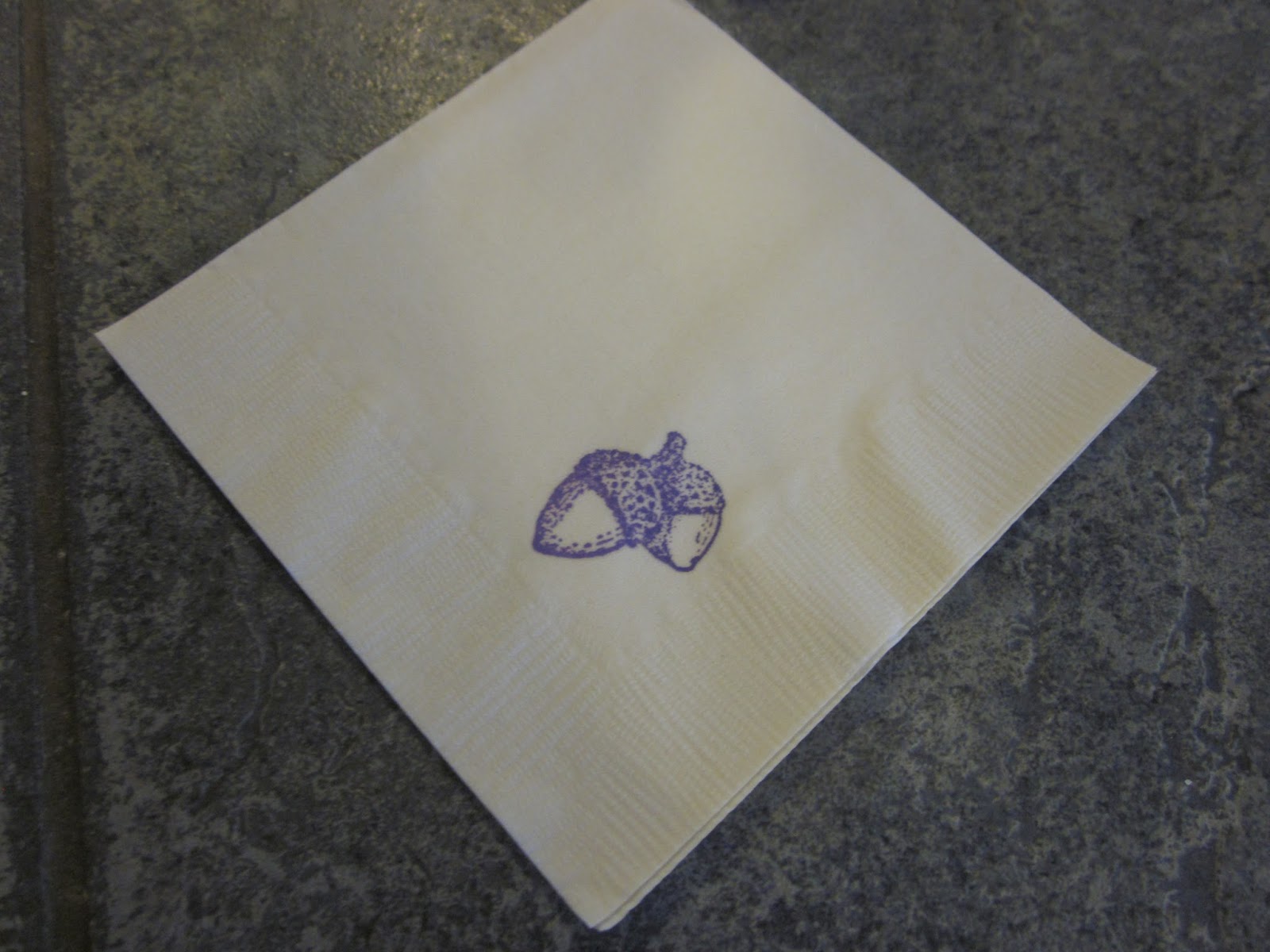 Repeat with all the napkins. Let dry. Done. 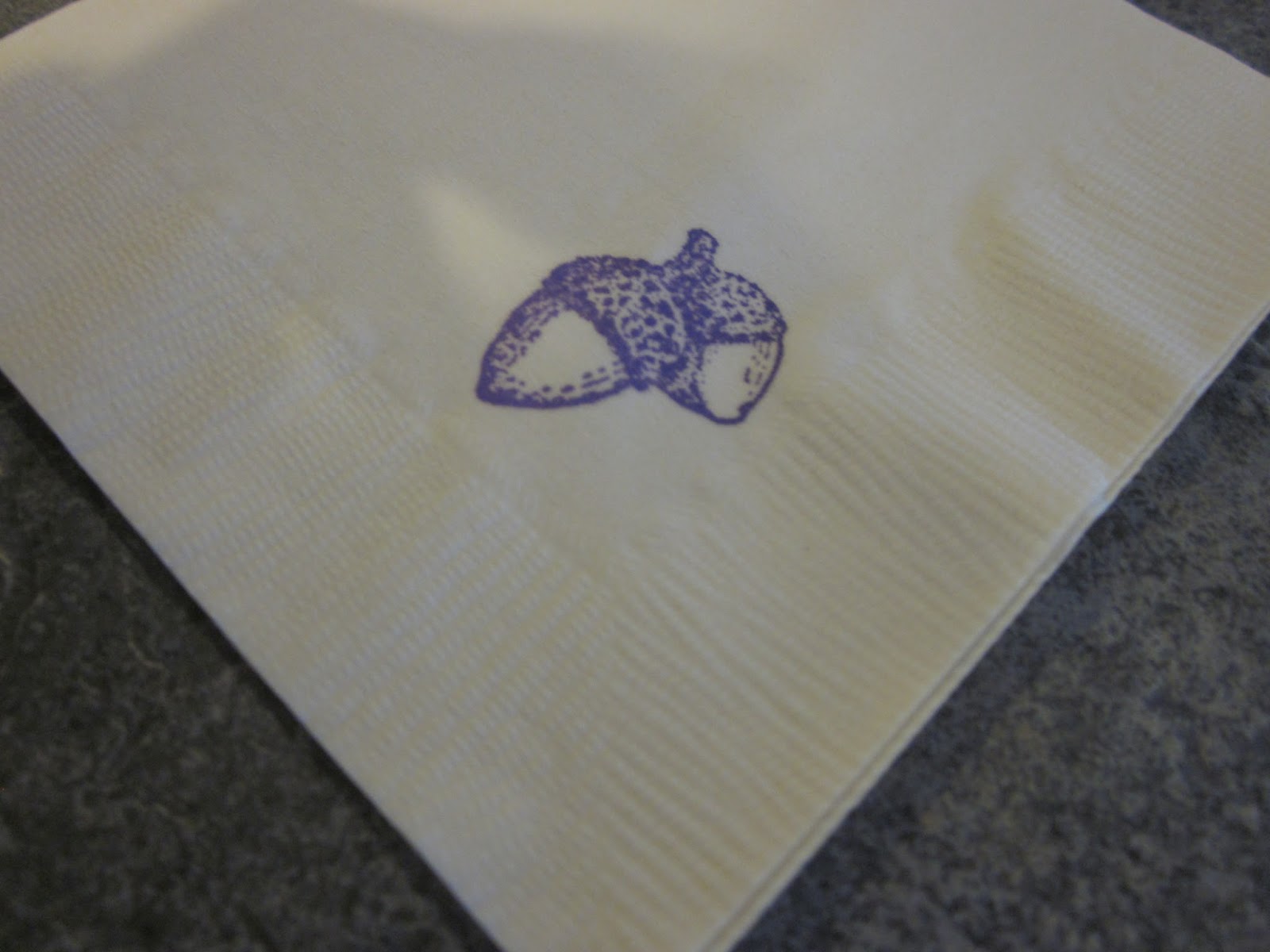 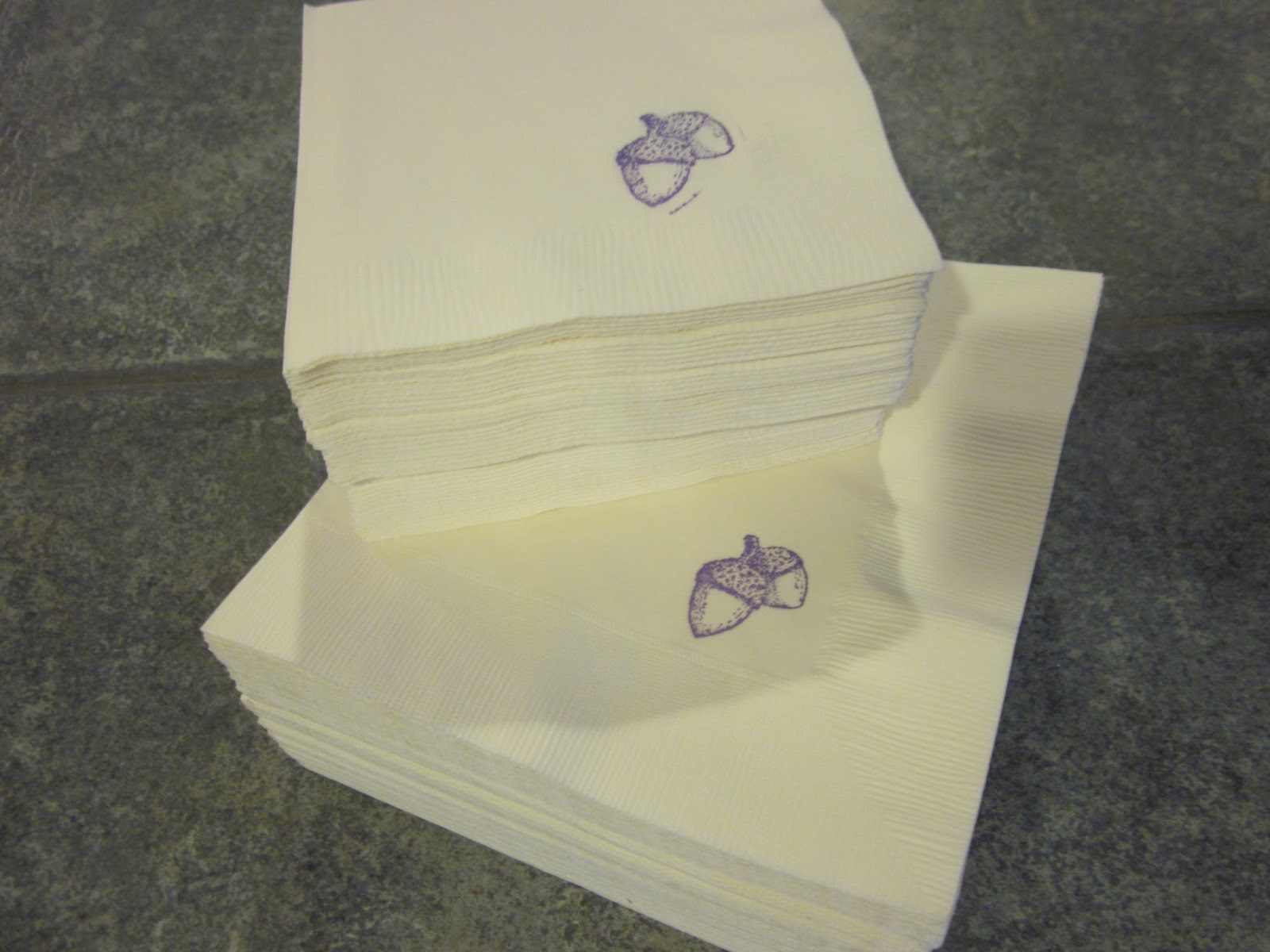 I searched for weeks at every craft store around, trying to find a fairy stamp for Princess's party. But I couldn't find one. So I settled on acorns instead. Acorns are kind of fairy-ish, right? Fairy food maybe? A butterfly would have been cool as well, but I'm a little grossed out by them....don't ask me why. I have a serious phobia of those horrible butterfly gardens. Anyway, these napkins looked great for her party and there are more pictures of them in her Big Party Reveal. Have a wonderful day!
Posted by Brooke at 7:30 AM No comments:

Hello everyone! Its finally time for the Princess's big fairy party reveal! I worked hard (planning, plotting, sewing, glue-ing) on this party and I am very excited to finally share it with you. Thank goodness I don't have to plan another one until next year.
I found the perfect party invitations from Tinyprints.com. You can see them here. I just don't think anything could have been as perfect for the fairy theme. I love them! And it was great because they came with matching thank you notes so that made my life a little easier.
I love this little chalkboard sign I picked up at Michaels (for a few bucks). I have now used it for both my daughter's birthday parties and I love that I can change out the message so that it can be used year round.
As you entered our house we had the Fairy and Elf dressing station set up in the dining room. All their skirts, wings, hats, crowns and wands were set up for them to get into their festive party wear. Unfortunately a lot of the kids (including my own birthday girl) were a little reluctant to put on anything. So much for my weeks of slaving! 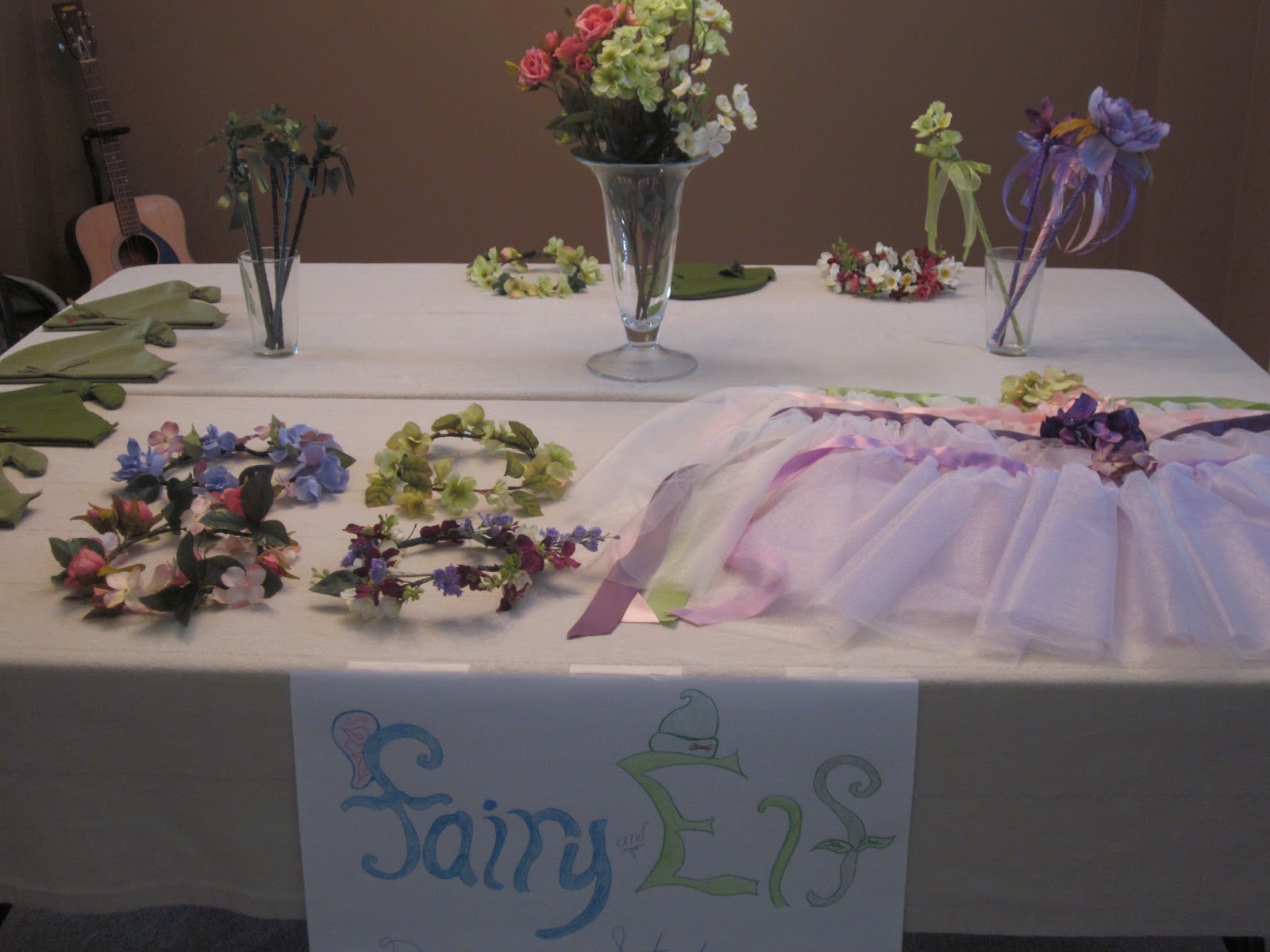 It was an afternoon party, so I decided to go more in the direction of snacks for the food. Plus it is so much easier! Everything that was served, kept up with the fairy theme. The fairy food, consisted of "twigs and acorns" (pretzels and popcorn), "fairy berries", "snail rolls" (highrollers bought from Costco), "meringue mushrooms" (the birthday Princess's favorite of the day), Pixie Stix, "fairy bread" (made by a friend) and "mushroom cupcakes". It turned out to be perfect party food. There was not a crumb of popcorn left by the time everyone went home. The snail rolls were a different story...you think its cause I called them "snail rolls"? 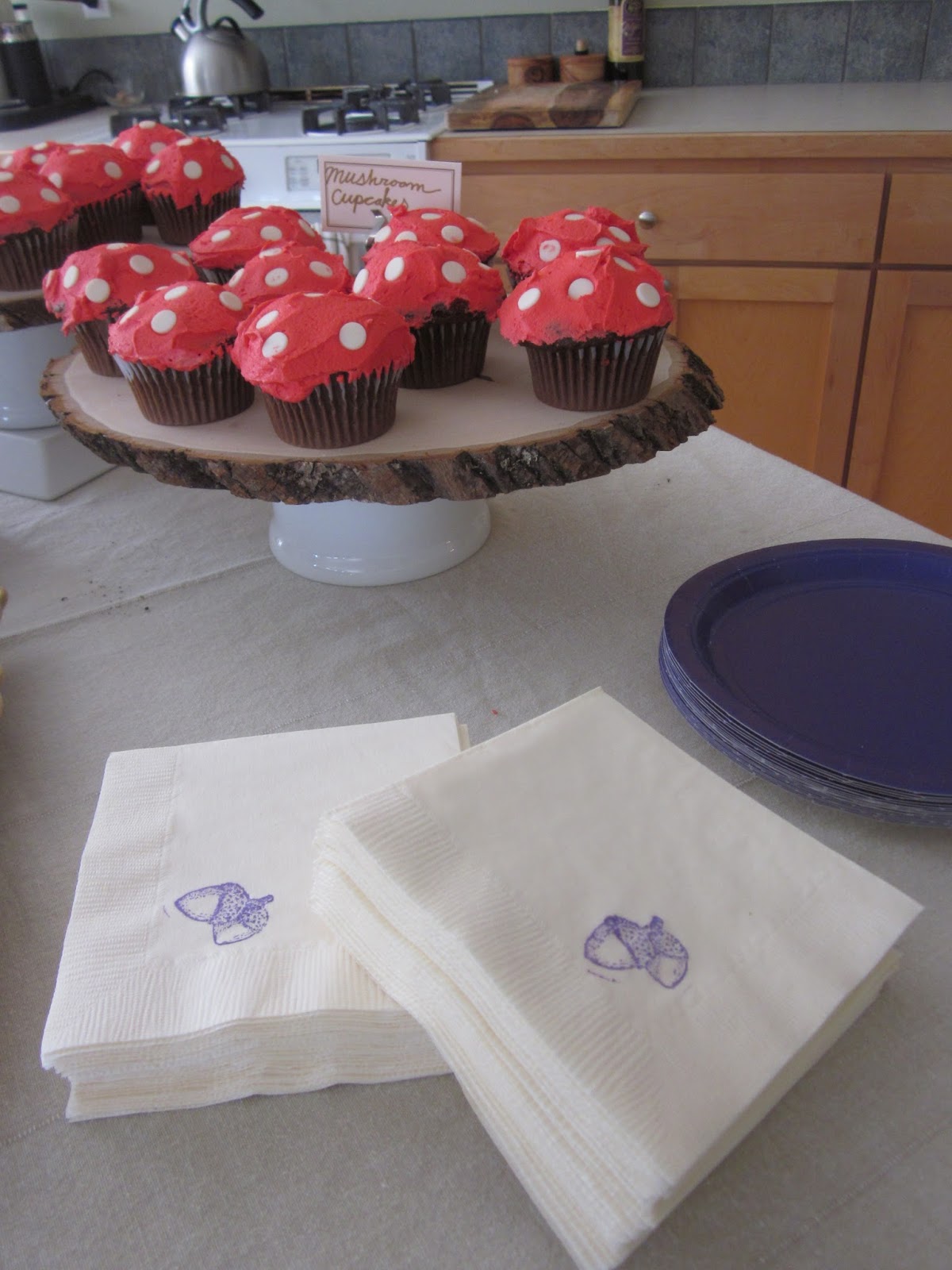 For the decor I focused on the outside, since I knew it would be a warm day and everyone would want to be out there. We put up our "Happy Birthday" sign (inside), my husband and I strung 18 tissue paper balls (in green, pink and purple. The party colors) across the yard, we hung a fairy bower that the kids could play in and I got cute little fake flowers that could be stuck into the ground. My husband built a small table (using an old piece of fence we had lying in the yard) and sawed all kinds of (free) firewood (I acquired from craigslist), then screwed them together with plaques I got from Michael's. I then sewed fabric mushroom tops and hot glued them on the top of the stools. The table and stools we made served as the kid's craft station, where they could paint and decorate "fairy houses" (little bird houses). The houses that they created could then be taken home as the party favors in addition to the costumes. 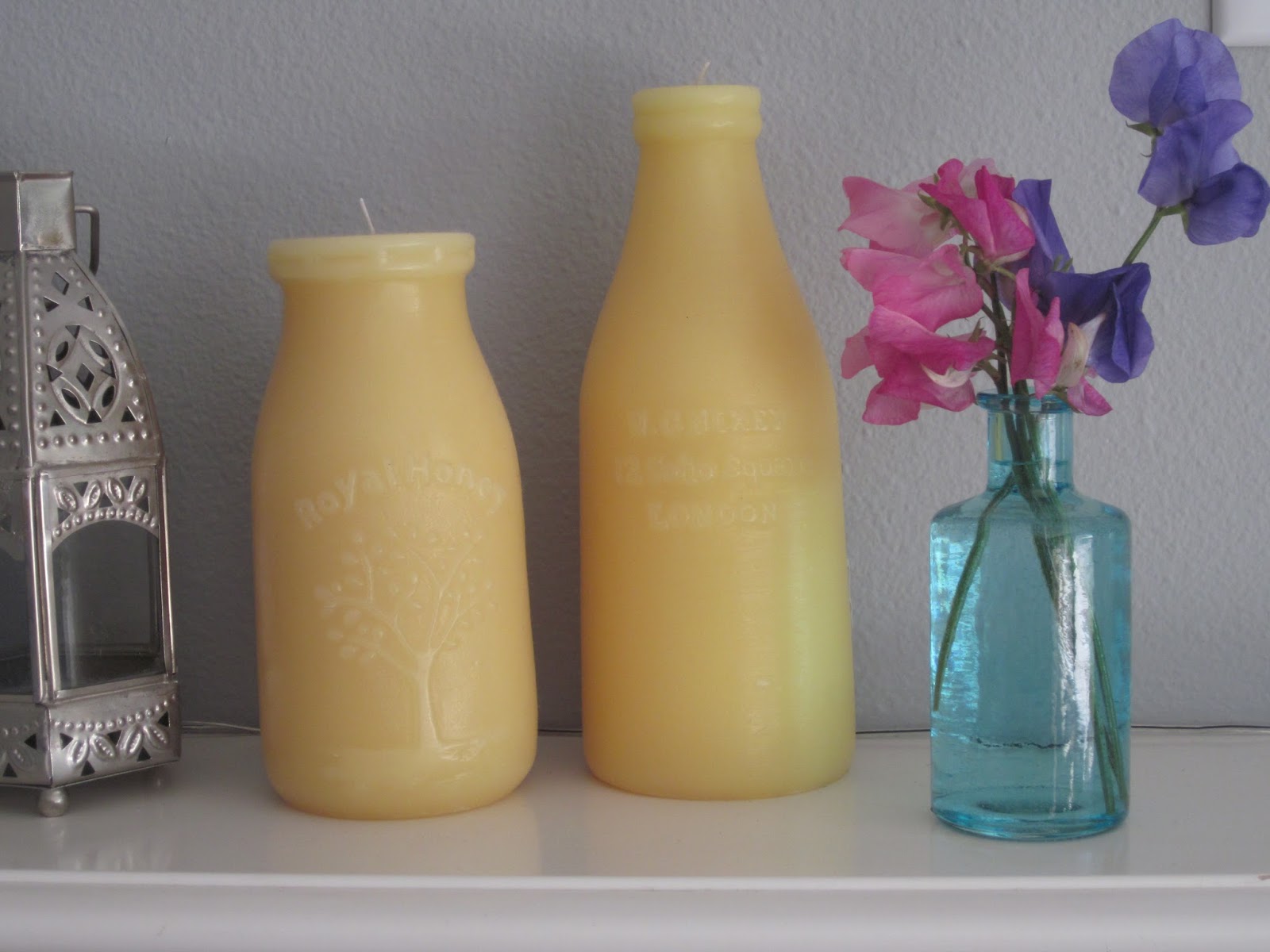 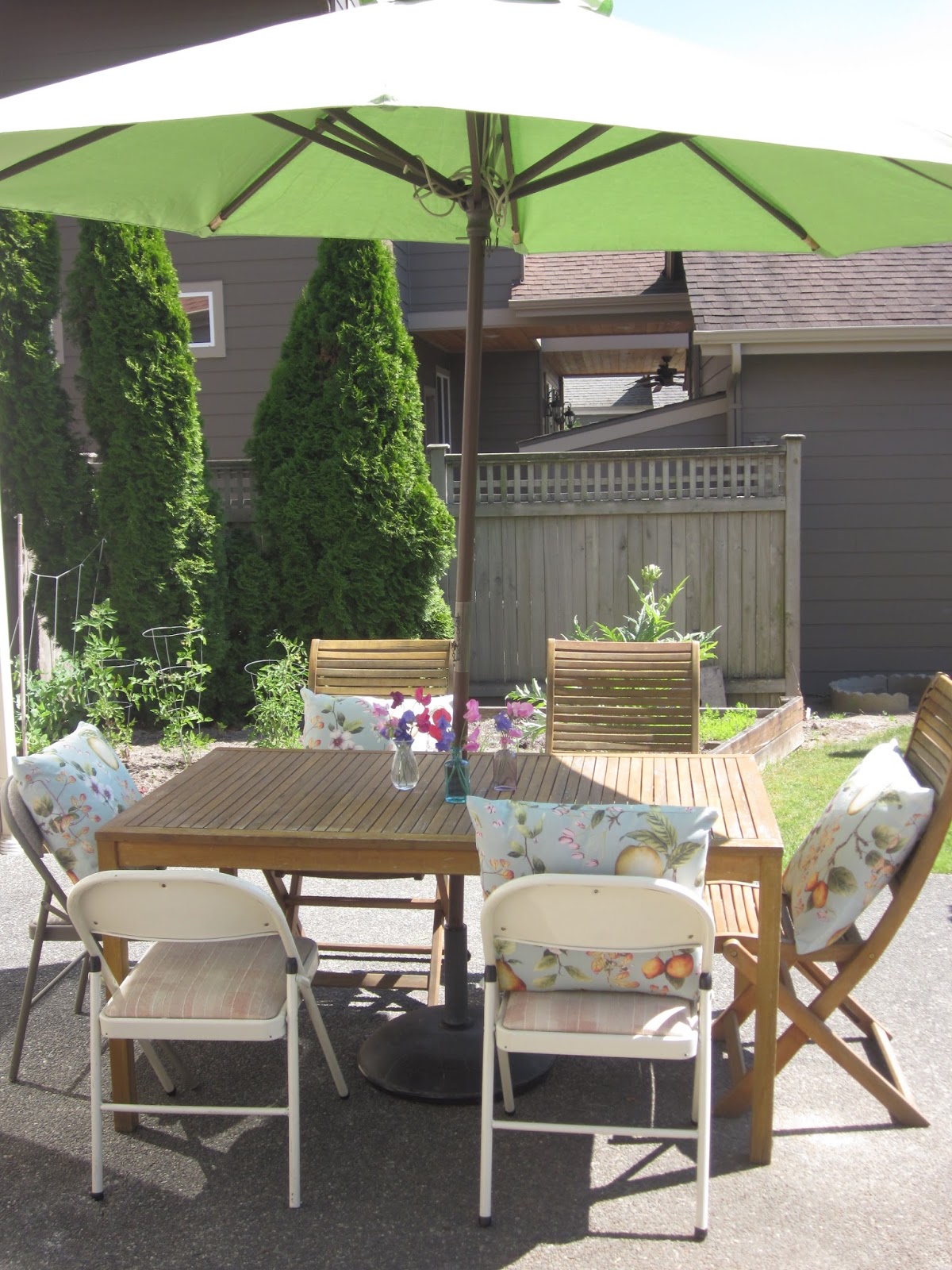 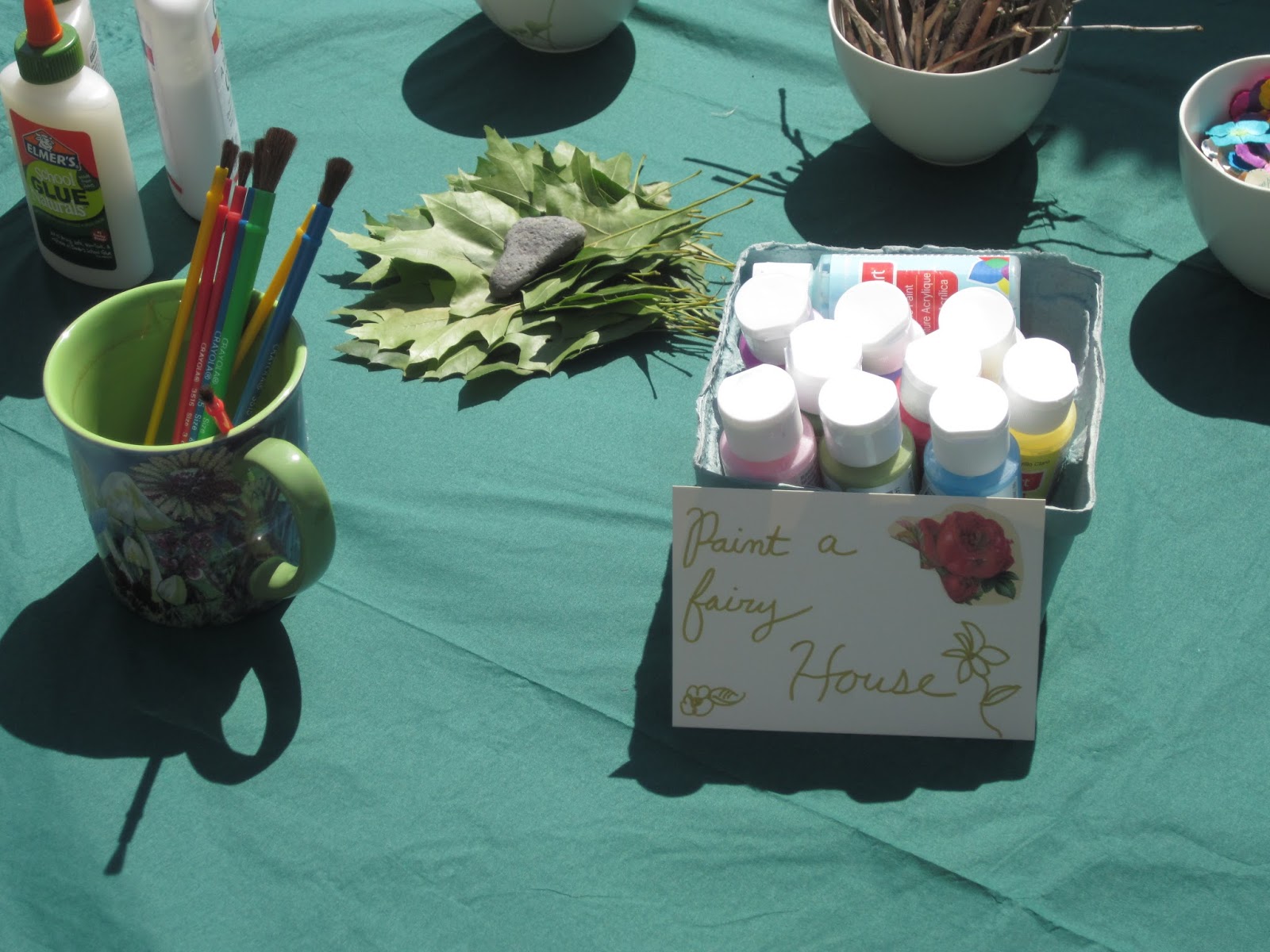 ﻿Things kind of got out of order as the party went on. It was supposed to be: craft, food, cupcakes and Happy Birthday song, then presents. I think it ended up being something like: food, cupcakes, craft, food, presents, cupcakes. The OCD in me was going nuts. But its just the way things happened and I think Princess had a great party. I would constantly find her reaching up (with her cute pudgy hand) the counter to steal a meringue mushroom. I think that's literally all she ate, plus a few licks of cupcake frosting of course. 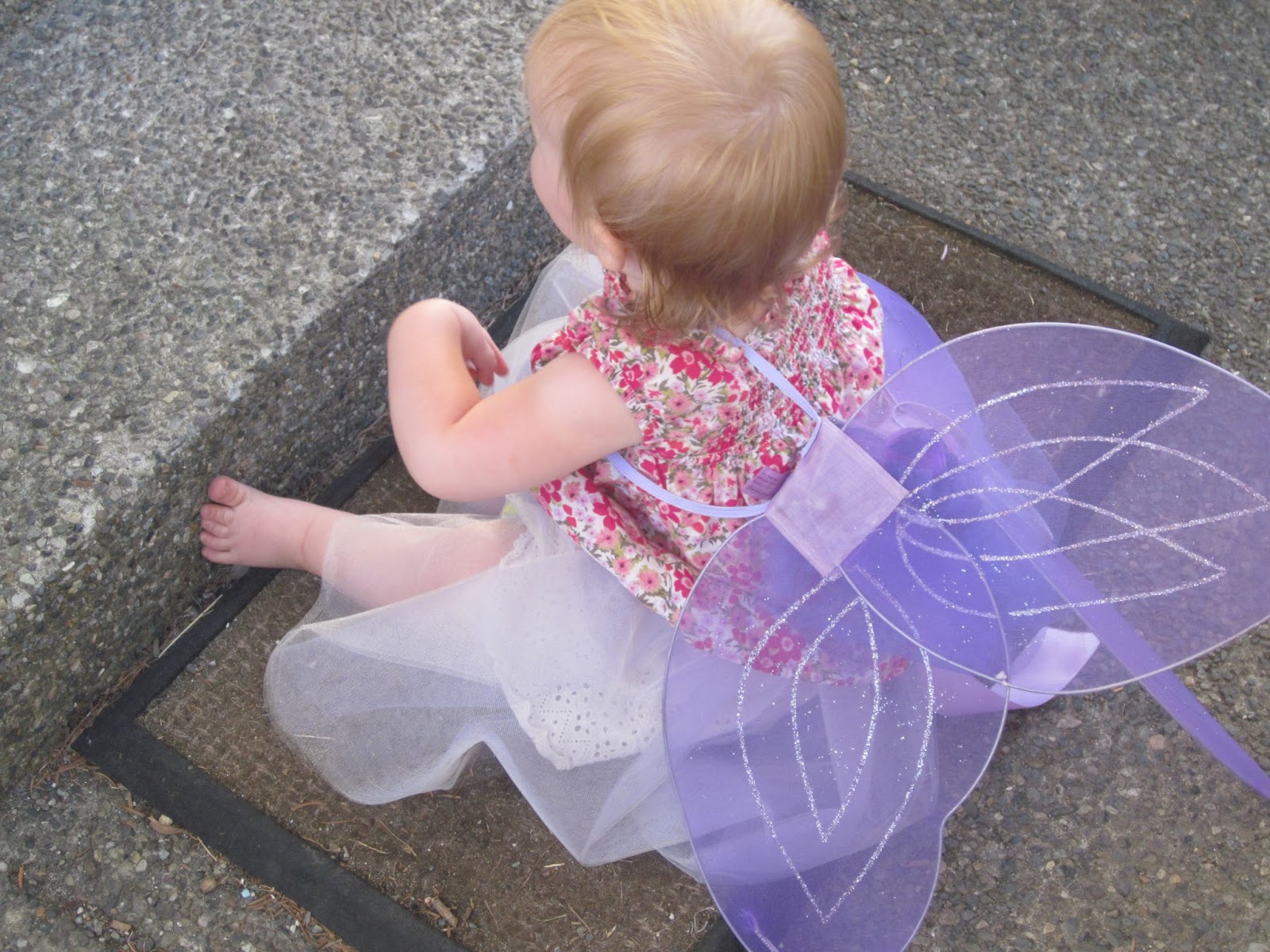 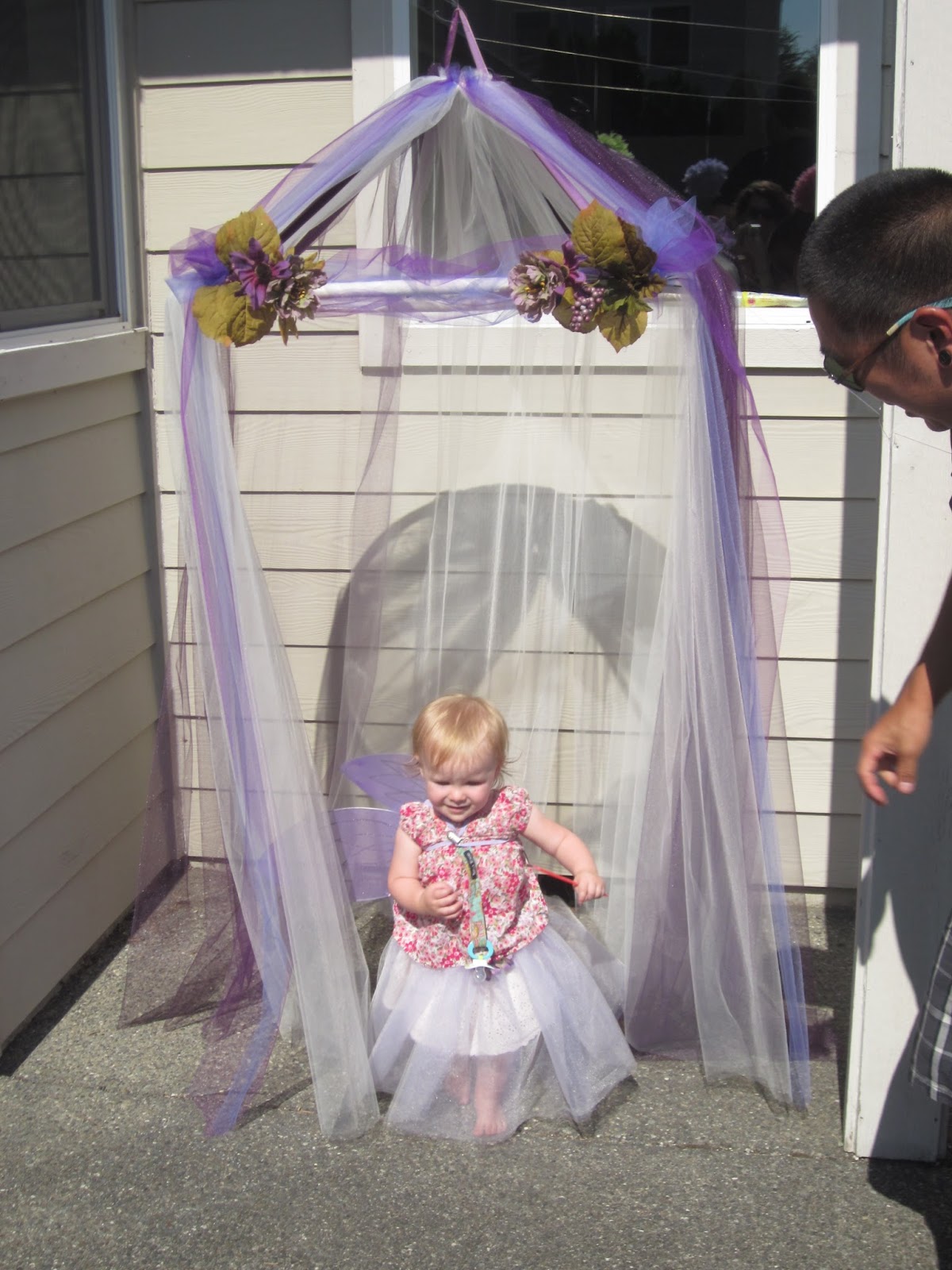 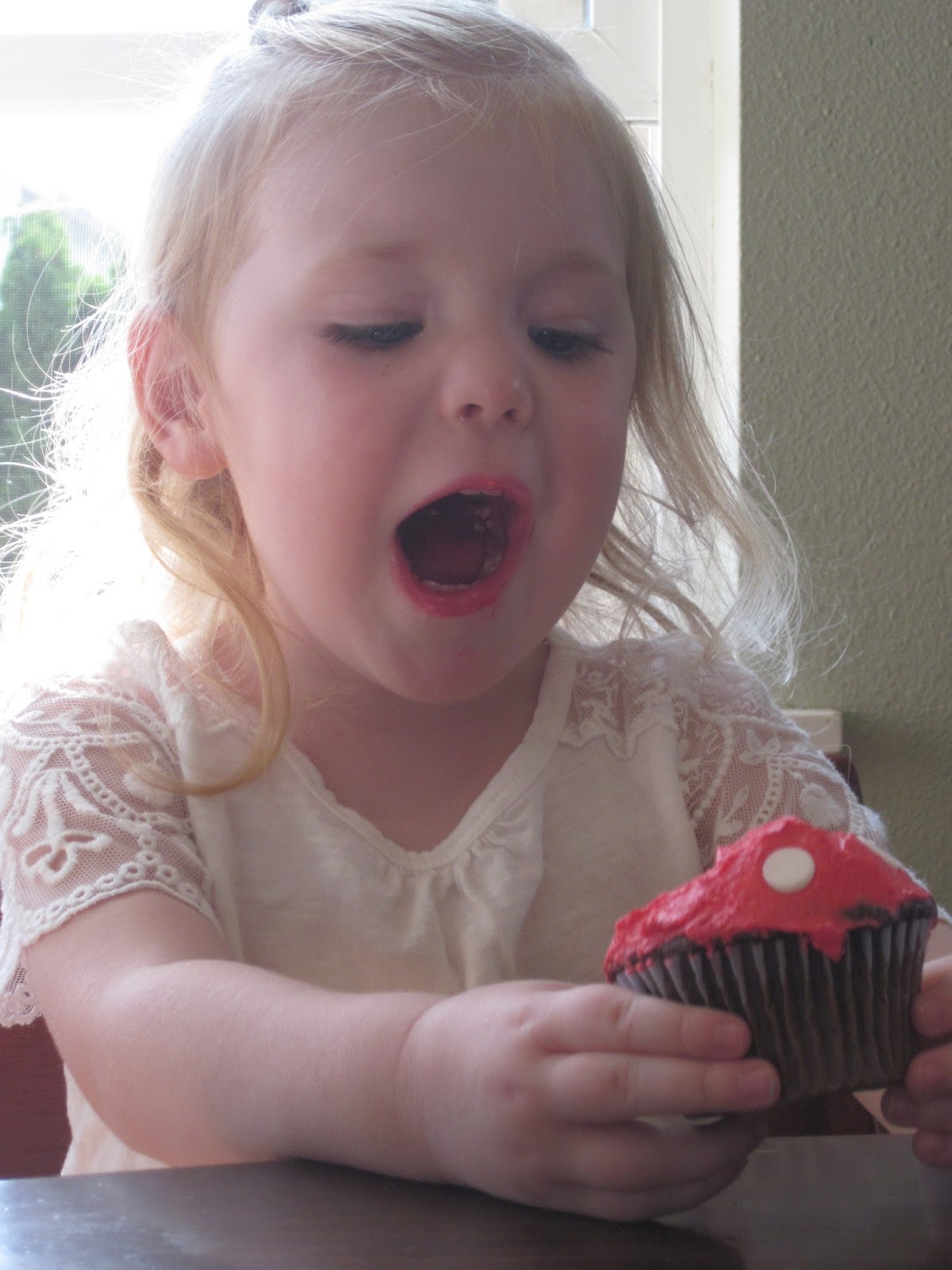 The party was a success and I think Princess really enjoyed it. I am excited to see what she requests for her party next year. She will be old enough to decide what she wants and it will be interesting to see what new things she is into. I am up for a different challenge! A baking party? A unicorn party? A pirate party? We'll just have to wait a year and see.

Hope you have all enjoyed seeing the Princess's 3rd birthday party. I don't think I'll have any parties to plan for awhile, (thank god) but Halloween is coming....
Posted by Brooke at 7:30 AM No comments: